What is Boron? Boron is a chemical element with symbol B and atomic number  The name derives from the Arabic buraq for “white”. Although its compounds were known for thousands of years, it was not discovered or ‘isolated’ until 1808 by the French chemists Louis-Joseph Gay-Lussac and Louis-Jacques Thenard, and independently by Sir Humphry Davy, an English chemist, in 1808 who isolated boron by combining boric acid (H3BO3) with potassium. Nowadays, boron is obtained by heating borax (Na2B4O7·10H2O) with carbon, although other methods are used where high-purity boron is needed. 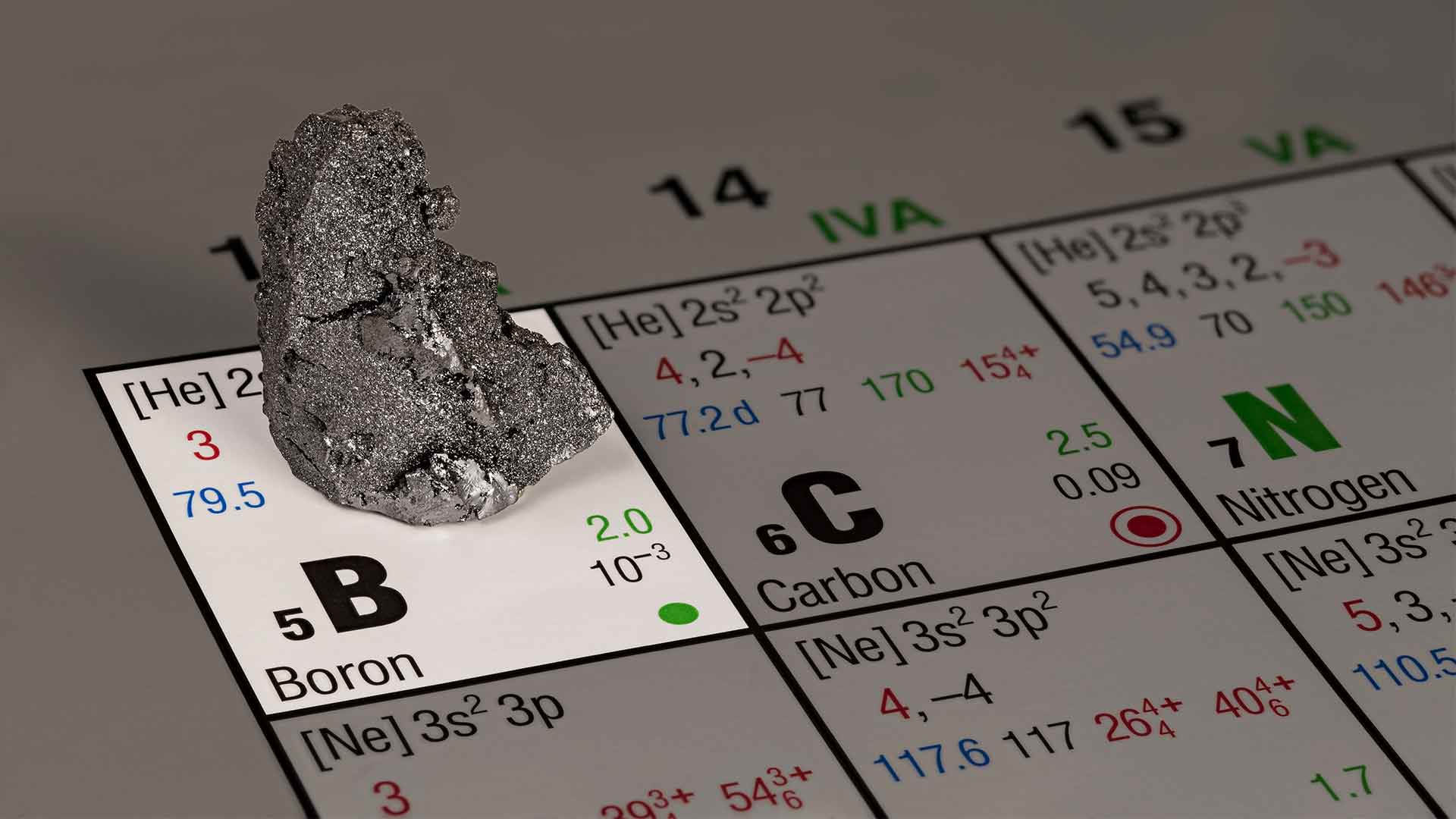 Boron may have been the key to the evolution of life on Earth. The element stabilises ribose, part of RNA, the self-assembling molecule that may have preceded DNA. A June 2014 study found that boron is present in rocks that date back to 3.8 billion years ago. Boron has also landed on our planet from Mars. A Martian meteorite that landed in Antarctica contained significant traces of boron.

Boron occurs as an orthoboric acid in some but not all volcanic spring waters, and as borates in the minerals borax and colemanite. Extensive borax deposits are found in Turkey which has the largest borax deposits but rasorite is the most important source of boron, found in extensive deposits in California, USA, in and around the Mojave Desert.

Elemental Boron is a low-abundance element in the Solar System and in the Earth’s crust (about 0.001 percent by weight of Earth’s crust). Boron is a metalloid that is found in small amounts in meteoroids but chemically uncombined boron is not otherwise found naturally on Earth. Industrially, the very pure element is produced with difficulty because of contamination by carbon or other elements that are reputed to resist removal.

Belonging to the Boron Group are the chemical elements in the group 13 of the periodic table: boron, aluminium, gallium, indium, thalium, and some include nihonium. The elements in the boron group all have three valence electrons (or triels).

Boron is a chemical element with symbol B and atomic number – number of protons in the nucleus – 5. Classified as a metalloid, boron is a solid at room temperature. It has an atomic weight as follows:

Several allotropes exist, including α-rhombohedral B, β-rhombohedral B, γ-B, tetragonal boron
– Amorphous boron is a brown powder
– Crystalline boron is silvery to black, extremely hard (about 9.5 on the Mohs scale), and a poor electrical conductor at room temperature.

Natural boron is composed of two stable isotopes, one of which (boron-10) has a number of uses as a neutron-capturing agent. The number of isotopes – atoms of the same element with a different number of neutrons – is 6. Most common isotopes are: B-10 (natural abundance 19.9 percent) and B-11 (natural abundance 80.1 percent).

Boron is the lightest element of the boron group (above) with three valence electrons that form covalent bonds to produce a number of compounds including:

Borates are the form in which boron most often occurs in nature, mainly as borate minerals and borosilicates. The incomplete octet means that Borates act as Lewis acids. When a trigonal boron atom accepts a pair of electrons from a Lewis base, it adopts a tetrahedral configuration, and the octet rule is satisfied.

All borates are considered to be derivatives of boric acid B(OH)3.

The simplest borate anion, BO33-, has a trigonal planar structure and is analogous to the carbonate anion CO32-, with which it is isoelectronic. Larger borates are composed of trigonal planar BO3 or tetrahedral BO4 structural units, joined together via shared oxygen atoms and may be cyclic or linear in structure.

Boron trioxide is one of the oxides of boron; it is a white, glassy solid with the formula B2O3. Glassy boron oxide is thought to be composed of boroxol rings, which are six-membered rings of alternating 3-coordinate boron and 2-coordinate oxygen. The short bond lengths and strong covalence, gives boron suboxide ( B6O) amazing physical and chemical properties: Hardness, low mass density, high thermal conductivity, high chemical inertness, and resistance to wearout.

Common borate salts (Sodium Borate is the sodium salt of Boric Acid) include sodium metaborate and borax. The borax chemical formula is also commonly written in a more compact notation as Na2B4O7·10H2O. Sodium borate can be obtained in high purity.  Borates are either triagonal (BO3) or tetrahedral (BO4) and either cyclical or linear in structure joined by shared oxygen atoms. The simplest borate anion, the orthoborate(3−) ion, [BO3]3−, is known in the solid state, for example, in Ca3(BO3)2 where it adopts a nearly trigonal planar structure.

Borax, also known as sodium borate, sodium tetraborate, or disodium tetraborate, is a boron compound, a mineral, and a salt of boric acid. Powdered borax is white, comprising soft colourless crystals that dissolve in water. It is used in cleaners, detergents and cosmetics. It is found in locations where rainfall is very low such as Turkey, Chile – Atacama Desert California – Death Valley  and the Mojave desert.

High-purity boron is prepared by reducing boron trichloride or tribromide with hydrogen, on electrically heated filaments. Impure, or amorphous, boron can be prepared by heating the trioxide with magnesium powder.

Sodium metaborate is a colorless solid compound (sodium, boron, oxygen –  NaBO2). It is commonly used to manufacture borosilicate glass, also known as pyrex. Here, some silicate [SiO4]4− units are replaced by [BO4]5−. Because this substitution has imperfections, the material is forms a glass with low coefficeit of thermal expansion being less brittle and resistant to cracking.

A highly complex structure with a chemical composition estimated as B4C, Boron Carbide is always slightly carbon-deficient. It is an extremely hard boron carbon ceramic and covalent material. Its structure makes it appropriate for use in military applications – bullet proof vest, tank armour, gun coatings. It is one of the hardest known materials, after cubic boron nitride and diamond.

Research shows that Boron Nanotubes (BNNTs) have extraordinary mechanical, optical, and thermal properties. They are gaining considerable attention from various scientific fields being promising as a potential nanomaterial more than other nanotubes. Recent research has shown that BNNTs have better properties than carbon nanotubes. These are well-studied for many applications in the environment-energy field. BNNTs demonstrate better properties in terms of electrical insulation properties as well as wetting, mechanical strength, thermal resistance, and. Electronic, drug delivery, nano-medicine, biomedical, aerospace, energy, and environmental applications can benefit from these properties.

The primary use of boron is as boron fibers with applications similar to carbon fiber in some high-strength materials. About half of all production consumed globally is an additive in fiberglass for insulation and structural materials.

The next leading use is in polymers and ceramics in high-strength, lightweight structural and heat-resistant materials. Borosilicate glass is desired for its greater strength and thermal shock resistance than ordinary soda lime glass.

As sodium perborate, it is used as a bleach.

A small amount is used as a dopant in semiconductors, and reagent intermediates in the synthesis of organic fine chemicals.

The primary use of the element itself is as boron fibers with applications similar to carbon fiber in some high-strength materials. It

The isotope boron-10 has properties which make it able to absorb neutrons, which makes it useful for controlling nuclear fission, which is driven by careening neutrons knocking uranium atoms apart. Boron absorbs excess neutrons reducing exposure to uranium atoms so every fission event triggers just one more fission event. Nuclear reactors are equipped with control rods, made of boron.

Boron may be a boon to tech as well. In July 2014, researchers discovered the first boron “buckyball,” a cagelike structure similar to the soccer-ball-shaped carbon buckyballs often used in nanotechnology. Carbon nanostructures (known as fullerenes) were first discovered in the 1980s, and they prompted a wave of research in the hunt for other intriguing atom clusters.

“If you look at the main group elements, there is no better place to start than boron,” said Lai-Sheng Wang, a chemist at Brown University who discovered the first boron buckyball. Boron atoms bond strongly with each other, Wang told Live Science, and the element has a very high melting point. It’s tough stuff.

Wang’s research team put clusters of boron atoms together to examine the shapes as they bonded. They achieved this by using lasers to pull electrons from the cluster. By measuring the speed of dislodging, they were able to map out the structure – borospherene’.

Some of boron’s flat structures can be very useful. Scientists found that 36 atoms of boron will form a disk with a perfect hexagonal hole in the middle — an arrangement that theoretically makes it possible to create a stable, one-atom-thick sheet of boron, the boron equivalent of graphene, which is an atom-thick sheet of carbon molecules. Graphene holds a great deal of promise for tech because it is a cheap, strong, flexible conductor

Borophene is being researched for its potential to be a superconductor – electrical and thermal – with boron sheets in flat layers to create more efficient conduction substrates. This has applications for semiconductors, batteries and powertrains, powered by neodymium magnets. 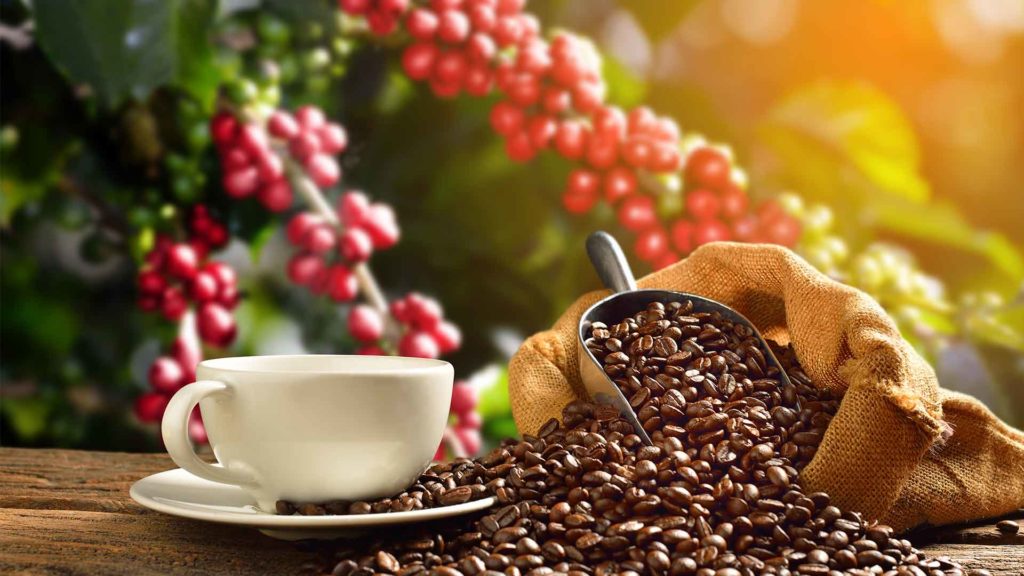